Earlier this month, I visited Baku in Azerbaijan for the first time. The country has been on my radar for a few years, particularly as a lot of friends visited whilst I was living in Iraq. I was enticed by the mixture of Turkic, Iranian and Russian influence, and the combination of beautiful old and new architecture. I was also reading ‘The Silk Roads‘ by Peter Frankopan at the time, which gave me a stronger historic and geo-political understanding of the place. I travelled alone and found it to be an incredibly easy country to explore. Here are a few reflections on my visit.

THE OLD: The varied architectural styles reflect the diverse influences on the city over the centuries. I stayed in the Old City of Baku, which is the beautiful fortified centre of the capital built around 500 years ago. These buildings show both Turkic and Iranian styles with stunning stonework and wooden balconies hanging over the cobbled streets. I visited Maiden’s Tower (symbol of the city) and the Palace of the Shirvanshahs, which typify much of the architecture in this part of town. As you wander out of the old city, you witness the city’s expansion following the discovery of oil in the 19th century with huge Russian buildings dominating wide boulevards and the Caspian promenade.

AND THE NEW: Then you get to the really bonkers part. Over the past decade, the government of Azerbaijan has invested a lot of its oil wealth in pieces of trophy architecture. The night skyline is dominated by the Flame Towers upon which a light show is projected every evening, including flames and the Azerbaijani flag. Then there is the the Carpet Museum, which is shaped like a carpet! The Heydar Aliyev Cultural Centre (pictured above) designed by Zaha Hadid is an absolute delight to visit. Majestic and mind-blowing for the scale and audacity of its design. The Centre is a little out of the way but well worth setting aside an afternoon to wander. The contrast of old and new across the city makes it a really exciting place to explore. 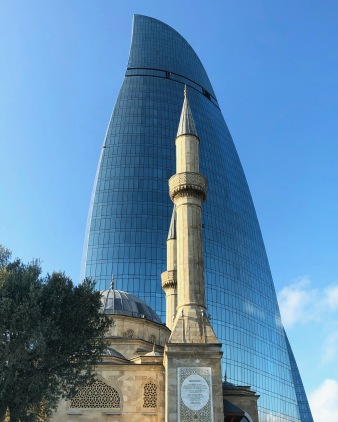 FOOD AND WINE: Again, the Turkic, Iranian and Russian influences throughout Azerbaijan’s history make for a fantastic culinary experience. I did not end up having caviar – probably the Caspian Sea’s second most famous product – but I did enjoy a number of beautiful traditional dishes from both eastern and western Azerbaijan, as well as some Georgian food. On my first night, I stopped by Cizz-Bizz, which is both the name of a local dish and a charming (if slightly cliché) restaurant in the heart of the city serving a wonderful range of traditional foods. I really enjoyed the Sheki Pitisi – a traditional stew that is served in two parts – as well as the Kefli Becha and Toyoq Cigirtmasi. And the bread in Azerbaijan is phenomenal – like traditional Turkish bread but slightly glazed on top. I would also highly recommend the Shirvanshah Museum restaurant – a 19th century bathhouse converted into an ethnographic museum of handicrafts and themed rooms – that served a wide range of traditional local dishes and some fantastic Azerbaijani Savalan wine. If you’re looking for drinks with a view, I would suggest grabbing some wine at the Museum Inn opposite Maiden’s Tower. They even serve pomegranate wine, which was a little too sweet for my tastes. 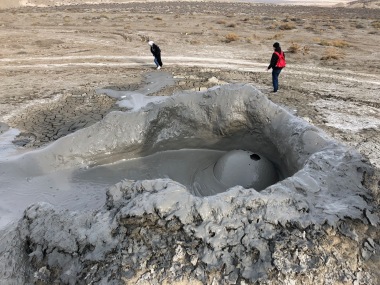 AROUND BAKU: Getting out of Baku is easy. I arranged two day trips in one of the city’s many tourist agencies on arrival. The first captured the ancient history and geological wonders of Azerbaijan. The oil and gas is so close to the surface here that it is seeping and bubbling out in places. I took a ride in a Russian Lada to visit a collection of mud volcanoes (photo above) that ooze and spit cold, grey mud from the ground. The volcanoes are set within the very eerie, barren littoral landscape south of the capital. You can see old and new oil wells pumping rhythmically across the horizon and into the Caspian Sea. We then travelled to the nearby Qobustan Petroglyph Reserve to see stone engravings dating back 12,000 years. Our next stops went someway to explain why Azerbaijan is known as the land of the (holy) fire. The Suraxani Fire Temple with a flaming hearth at its centre – originally the site of Zoroastrian worship – was built by Hindu travellers from southern Asia in the 18th century as a refuge. Nothing spectacular to see but worth the visit to understand a little more about Zoroastrian (and later Hindu) culture in the region. It certainly helped to bring the ancient silk roads to life in my mind. I read that ancient travellers would write about numerous natural-gas flames spurting out of the ground around Baku. We visited one such site at Yanar Dag. This burning hillside had been roaring for decades. A welcome relief from the cold and a beautiful, if surreal, sight at dusk. 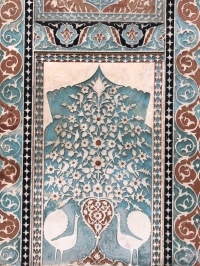 SHEKI: On my final day, I took a 14 hour day trip (!) to the north-western town of Sheki close to the Russian border.We stopped at a number of historical sites on the long drive west, including Ismayilli to see the oldest mosque in the country, and Qabala to explore the lakeside resort town. I spent the day as the third-wheel to a Russian couple that spoke no English. I speak no Russian. The three of us shared a private dining space for lunch; starring at each other awkwardly in silence for an hour whilst passing the bread and kebabs. Spasibo. We finally arrive in Sheki after five or six hours and visit the 18th century Palace of Sheki Khans (Xan Sarayi; photos above). The intricate paintings both internally and externally were stunning, and told the story of significant historic battles in the region. The nearby Karavansaray is a refuge for travelling traders and again highlights the ancient commercial routes across this part of the world. We then drove to the nearby village of Kish to see one of the first churches built in the region during the time of Caucasian Albania, the Christian nation that once covered most of northern Azerbaijan (interestingly, unrelated to modern-day Albania). This day trip was long (and would have been more fun if I could have spoken to my fellow travellers) but it was well worth the schlep to get out of Baku and see a very different, rural side of the country.

Azerbaijan is a wonderful place to visit. There is plenty to do for five to seven days without feeling rushed off your feet. Baku itself is a very calm and friendly city with much to see within walking distance of the Old City. The good metro system helps for those places slightly further away – and day trips outside the capital are very easy to arrange. The food and wine is inexpensive and delicious. I was conscious that, had I not been travelling alone, there would have been a number of great bars and clubs to enjoy in the evening as well. Azerbaijan has a fascinating history, which is well worth reading about in advance, and an interesting future given its geo-politically significant location. It felt a world away from England, which is exactly what I needed.

P.S: Oh, and remember to buy an e-visa. I forgot until 45 minutes before my flight! Urgent three-hour e-visas available at a cost.

5 thoughts on “Azerbaijan: Land of fire and bonkers architecture”

This is a text widget. The Text Widget allows you to add text or HTML to your sidebar. You can use a text widget to display text, links, images, HTML, or a combination of these. Edit them in the Widget section of the Customizer.